At the 2014 Annual ACHE Breakfast on August 14, several awards for the year were presented to outstanding Hawai’i Pacific ACHE chapter members. The Senior-Level Healthcare Executive Regent’s Award recognizes ACHE members who are experienced in the field and have made significant contributions to the advancement of healthcare management excellence and the achievement of ACHE’s goals. Members are evaluated on leadership ability; innovative and creative management; executive capability in developing their own organization and promoting its growth and stature in the community; contributions to the development of others in the healthcare profession; leadership in local, state, or provincial hospital and health association activities; participation in civic/community activities and projects; participation in ACHE activities; and interest in assisting ACHE in achieving its objectives. The award was presented by Ms. Coral Andrews, FACHE and ACHE Regent for Hawaii-Pacific to two recipients this year:

Art Ushijima.  The first award, the district Senior-Level Healthcare Executive Regent’s Award was presented to Art Ushijima.  Mr. Ushijima demonstrates his commitment through serving as the President and CEO of Queen’s Health System since 2005 and serving on numerous committees and boards that serve healthcare services, governance, and education throughout Hawai’i and the US. The award was bestowed on Mr. Ushijima by Ms. Coral Andrews, FACHE, ACHE’s Regent for Hawaii-Pacific. 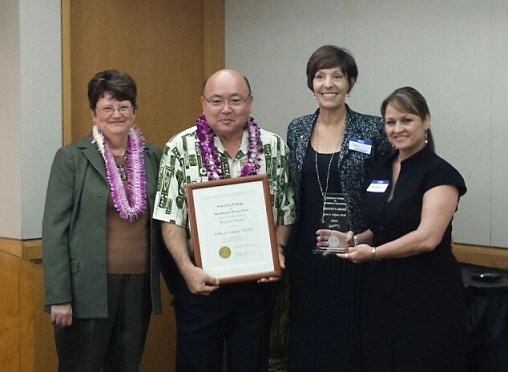 Gidget Ruscetta.  The other ACHE Healthcare Executive Regent's award was presented to Gidget Ruscetta. Gidget has served multiple roles on the Hawai’i Pacific ACHE Chapter board as Newsletter Committee Chair and also Treasurer. Gidget is known for her leadership as COO at KMCWC and for her promotion and cultivation of leadership in those around her as her newsletter has been recognized by ACHE nationally as a “best of chapters” through its substantive content and readability. 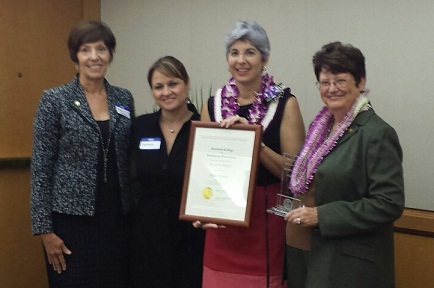