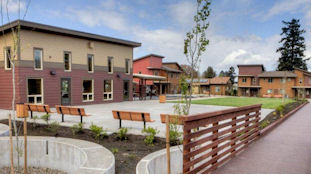 That approach was the game plan for Bridge Meadows, Portland, Ore., winner of a Silver award for Best Assisted Living/Special Needs in the 2012 Best of 50+ Housing Awards.

The community was not a traditional assisted living community, even though assisting others is a huge part of the mix. And the special needs that are addressed in the community aren’t at all what one might think of when hearing that term.

Bridge Meadows serves two groups of residents — nine families who are fostering a total of 27 children of relatives with an eye toward adoption, and 29 low-income seniors.

This approach had appeal because it addressed two growing problems. First, there had been huge growth in methamphetamine use in the area, with the result that a large number of children could no longer be cared for by their addicted parents. That situation coincided with the second problem: The nation’s financial collapse shattered many seniors’ plans for retirement, leaving them in need of assistance. 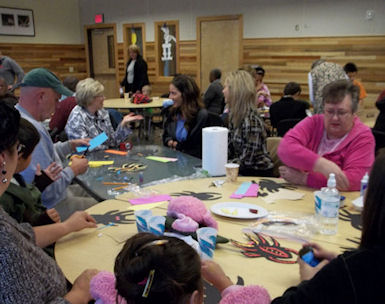 In return for apartments at a significantly lower rent — even lower than most subsidized housing, thanks to a generous private grant — the elder residents commit to providing 100 hours of volunteer service every quarter, or about 10 hours a week, to the community at large or to the fostering families, including a weekly "Happiness Hour" where the entire community gets together (at right).

The foster families lease single-family and attached homes with room for six children, of which three must be foster children. The families have a five-year window to adopt or become legal guardians for at least three children. The families who adopt may stay, continuing to pay an unsubsidized but income-based rent, until the children leave the nest and move on. During the program's first year, 67% of the children who were part of the program were successfully adopted. 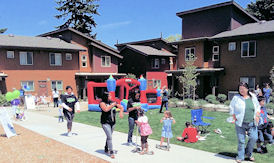 The elders share a need for an affordable retirement, and they all had to complete a lengthy application process meant to select residents who were excited to be part of the new program and committed to stay active in it. They brought with them a variety of skills — at-home parents and grandparents, as well as men and women who’d worked outside the home, including teachers and other college graduates. They may choose to babysit, tutor, work in the garden, lead arts and crafts activities, cook, provide transportation, monitor the playground — or whatever else their interests and talents lead them to offer.

The project began to take shape around 2004 as Portland began to explore better uses for a two-acre former school campus in a low-income neighborhood. Some residents had heard of a community called Hope Meadows, built on the site of the decommissioned Chanute Air Force Base in Illinois that had combined these same two populations and succeeded in making the lives of both groups better. People from Portland visited that community and found it inspiring, and took the idea to City Commissioner Dan Saltzman, who shared their excitement and championed a proposal to use the school for a similar community.

With help from Generations of Hope Development Corp. (GHDC), the development consultancy that helped with the Illinois project, the Portland community put together a public/private partnership. GHCD obtained grant money from the W.K. Kellogg foundation, which assisted in the effort to obtain a pre-development loan. Portland's Guardian Real Estate Services signed on as the developer/builder for the project.

The Bridge Meadows group, working with the local housing authority, was able to use Low-Income Housing Tax Credits, low-income weatherization program funding, and funding from the Energy Trust of Oregon to build the seniors’ housing to high standards of energy efficiency, including solar hot water, to keep ongoing costs low. In addition, the group was able to raise sufficient private funds to build the family housing and the common spaces — a stunning achievement, given that the effort was undertaken at the low point of the recession -- and one that garnered local press coverage.

As the buildings were going up, work was being done to prepare for the human side of the project. The executive director of Bridge Meadows, Derenda Schubert, Ph.D., along with attorney Jo Anne Long, chair of the board of directors, and Program Director Renee Moseley, a licensed clinical social worker, got busy. T 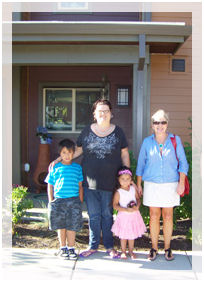 hey developed an application process for seniors who might want to live at Bridge Meadows. They purposely made it long and detailed, involving interviews and paperwork, because they not only wanted to know as much as possible about the seniors, but they also wanted to weed out anyone whose only interest was the affordable rent. Bridge Meadows was looking for seniors who wanted to help, and had the drive and talent to do so.

Working with the local governmental agencies was made easier by the involvement of then-Governor Ted Kulongoski. He had experience in the foster care system as a child, which gave him insight into the needs of children in foster care. He encouraged the leaders of the Oregon Housing and Community Services agency and Portland's Department of Human Services (DHS) to examine how such an intergenerational community might meet the needs of the city's residents.

DHS and Bridge Meadows forged a partnership, and DHS shouldered important responsibilities, including identifying families that best fit the criteria of the program — those who might be able to adopt or become guardians to other children in their extended families who were currently wards of the state.

The Track Record, and the Future…. 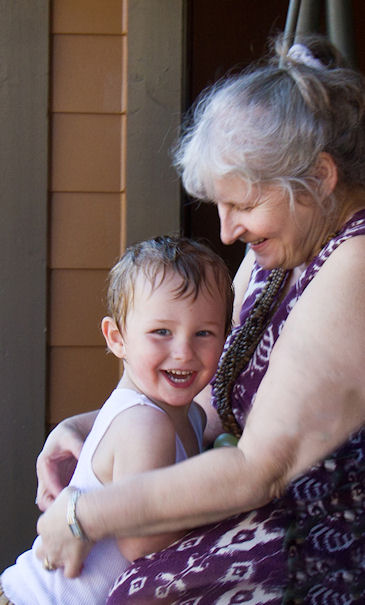 dge Meadows was a pilot program for Portland, and it has kept careful records that demonstrate its overwhelming success. Currently, 67 people live in the community. Of the 27 children aged 1-14, 52% are either adopted or are under legal guardianship — they now have families.

One of the elder residents, Joy C., describes her experience in the community this way: "I feel this sense among us that we can help patch up a small tear in society.  Instead of just being “low-income” seniors, I feel we are now contributing members of society. It’s both a subtle and grand shift in self-perception. We are now teachers, friends, aunties, grandparents, musicians, neighbors, uncles, writers, counselors — all more than a statistic or a hard-luck story."

So what’s next? Bridge Meadows' development team and advocates hope to do more along the same lines in Portland, and to assist others who might want to create such a community elsewhere. Executive Director Schubert said, “It is the vision of the Bridge Meadows Board of Directors and staff to create more intergenerational communities. We are embarking on the strategic planning to ensure the sustainability of Bridge Meadows, and the expansion of the model.”