January 18, 2013
National Association of Home Builders
FONT SIZE: A A A

In 2012, as part of its series of studies of the baby boomer cohort, MetLife Mature Market Institute (MMI) released a study that examined the attitudes and behaviors of the oldest boomers — those who turned age 65 in 2011.  Many of the respondents were boomers who were contacted in its 2009 study of the oldest and youngest boomers, so there were opportunities to see how responses might have changed in the ensuing years.

It was notable that the definition of “old” has changed since the first set of surveys in 2007. Today’s respondents set the bar for "old" at about 79 years on average – a year older than what they said in 2007. Respondents said that men, on average, would be old at about 77, while women wouldn’t be old until 80.

The most recent study found that significantly more boomers now report being fully retired, and significantly fewer say they're employed full-time. A greater proportion are retired but still work part-time or seasonally. One in four of the boomers re-contacted from the 2009 study reported a change in employment status within the previous three years. 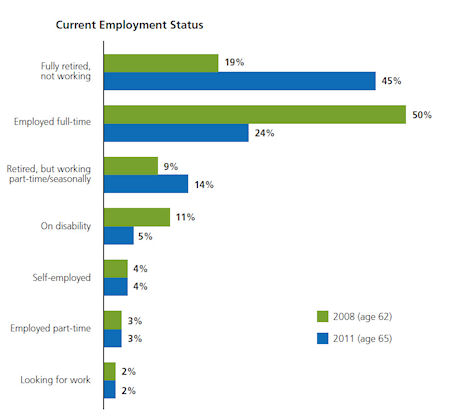 Of those working, just over half anticipate being able to retire before age 70, and 37% think they’ll be able to retire the following year. The average is 68.5 years, a bit more than two years later than those surveyed in 2008, when the average was 66.3 years. However, those who were fully retired in 2011 were younger — around age 58 — when they retired.

When asked their reasons for retiring, more than a third said it was because they’d reached retirement age, and/or they wanted to. 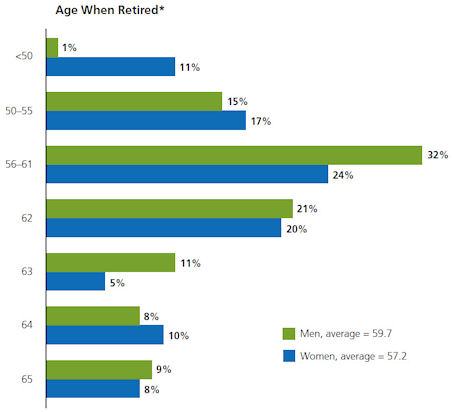 Economic, medical and quality of life circumstances played a role in people’s decisions to retire. The main reasons for retiring earlier were health reasons and job loss. The top reasons for remaining in the work force were a continuing need for a salary, and the enjoyment of working and being active. 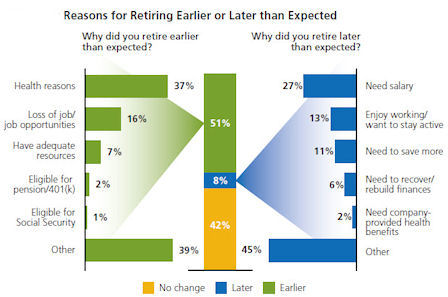 Money was involved in all but one of the biggest concerns respondents had about retirement. While about a fourth — 26% — had no concerns about retirement, and 16% were worried about staying productive and useful, all the other responses touched on money. Simply not having enough was the most widely reported financial concern, followed by the possibility of having to provide long-term care for oneself, spouse or partner, or outliving ones retirement savings. 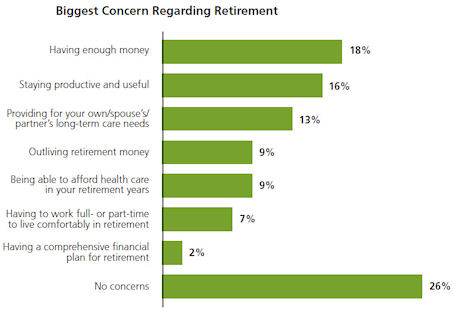 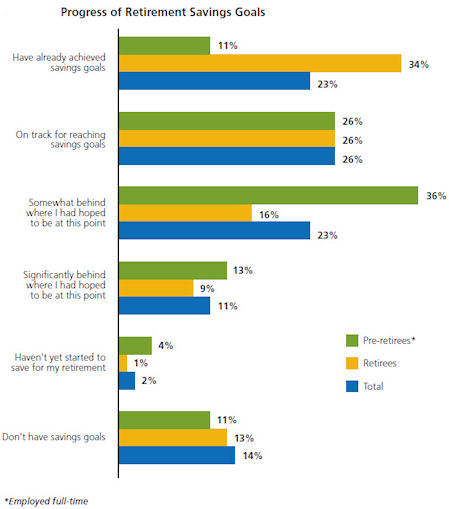 Those who do plan on moving also plan on downsizing. More than half the 2011 respondents say they planned to move to a smaller home, while only 33% of the 2008 respondents planned to downsize. There was an uptick in respondents who wanted an active adult community — from 9% in 2008 to 11% in 2011. 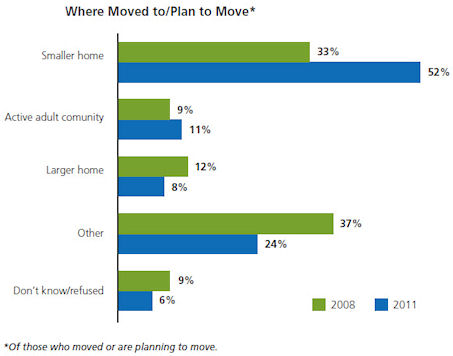 The complete survey report, as well as numerous other Mature Market Institute research publications concerning the boomer market, are available at www.maturemarketinstitute.com.