January 18, 2013
National Association of Home Builders
FONT SIZE: A A A 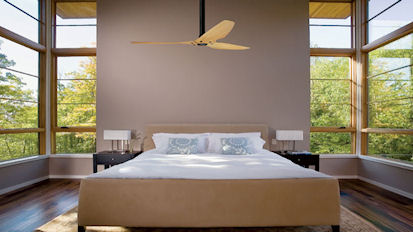 The elegant Haiku fan from Australia uses renewable bamboo to form thin curved blades that act as airfoils to move more air than flat blades could. The other technological advance is the trademarked Sensorless Drive, an efficient direct-current motor with patent-pending electronic controls. The sealed motor is smaller than other fan motors, and quieter. Its toroid magnet — not the electromagnet used in most fans — lets it run run up to 80% more efficiently, and without the sort of vibration and wobble that can come with other fans.

The remote-controlled fan has seven speeds, a timer that will turn the fan off after a specific time, and a Sleep setting that gradually dials the speed down over time. The bamboo blades come in either caramel or cocoa. The housing comes in black or white, and composite blades also are available in either black or white.

Quartz is a durable mineral — it's harder than glass and almost as hard as a steel file, according to the Mohs scale of hardness. Dupont uses it to make Zodiaq, a long-lasting surfacing material that resists scratching and heat. As a plus, it has depth and sparkle.

These two new colors of the Zodiaq Private Collection deliver visually interesting neutrals that will work with any kitchen or bath. They were chosen to be part of The New American Home at the 2013 International Builders' Show in Las Vegas. 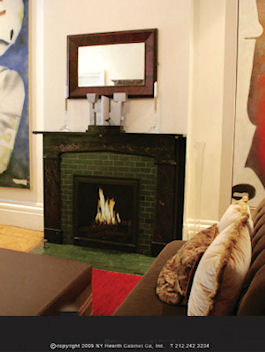 The fire in the Hearth Cabinet ventless fireplace comes from alcohol gel in a patented cartridge that lights instantly with a long match. It burns behind a locking safety door, and the fire lasts about two hours.

The company offers more than a dozen styles, custom sizes, three exterior finishes and two interior finishes, as well as a choice of three cartridge holders that look like firewood, river rock, or candles.

It comes fully assembled and ready to install with any mantel or surround, and can be located on an interior wall, since it needs no venting.

Both the New York City Fire Department and the NYC Department of Buildings have examined and approved the product for safety, making it the city’s only approved ventless fireplace system. 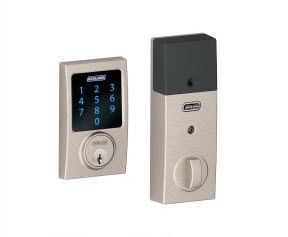 No Need for Keys

No, you can’t call a friend on the new Schlage Nexia lock, even though it looks like a smart phone. But when the owner uses the touchpad to enter a personal four-digit code, the motorized deadbolt locks or unlocks itself. The fingerprint-resistant pad cover ensures that no one can pick up a code by looking for smudges on the screen. A choice of three audible tones lets an owner at home know if someone has unlocked the door.

The lock also interacts with the Nexia wireless Home Intelligence system to allow the home owner to lock or unlock the door, and add, change or cancel codes remotely by calling in on a smart phone and accessing the Internet-based system. The system will send the owner’s phone a text if an alarm is triggered, or when specific codes are used to open the door. 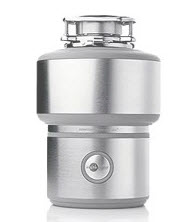 InSinkErator's Evolution Series has quietly moved disposer technology forward. The manufacturer says that the top-of-the-line unit, the Excel, has cut its noise levels by more than 60% over standard disposers. The other models also are quiet, with the Essential model making 40% less noise and the Compact model — designed for small residences — making 30% less noise.

But that's only half the story. Improved grinding technology has expanded the variety of food waste that the Evolution disposers can handle. The company says that the Excel, which has an additional grinding phase, can handle even chicken bones. It was chosen to be part of The New American Home at the 2013 International Builders' Show in Las Vegas.